Sara Sanchez is one of many Albuquerque residents who loves the city's libraries. Recently, Sanchez had the opportunity to show her devotion. As the administrator of her grandfather's estate, she gave a major boost to the renovation of the North Valley Library through a gift to The Albuquerque Public Library Foundation. She says her deceased grandfather, Michigan journalist Benjamin Nathanson, often visited libraries and would have been delighted to help get North Valley's doors open again. Sanchez' donation of $10,000 on behalf of Nathanson goes a long way to make that happen.

Other donors already had given nearly $4,000 to help the library. The fire and its smoke had devastated the inside of the 13,000-square-foot building at 7704-B Second St. NW. Painstaking hand-washing of every item and surface has been proceeding. Many items were not salvageable, such as carpet, lights, dropped ceilings, metal grid-work and chrome fixtures and pipes in the bathrooms.

Painted walls and ceilings are being thoroughly cleaned and repainted. The ductwork of the heating/air conditioning system was taken apart and thoroughly cleaned. Tile and vinyl floors were salvageable and have been cleaned. The wood ceiling has been sandblasted and refinished.

The Foundation hopes the library will be open in the spring, but no specific date has been set. Workers are moving as quickly as possible and library staff asks for your patience. Announcements will be made as soon as a schedule has been determined.

Groundbreaking due in December.

Generous contributors enabled the Foundation in April to give $100,000 toward the development of a new library at Central and Unser SW. This library will serve a population of 40,000. It will be the largest of all the branch libraries with 25,305 square feet. It will have a collection of 70,000 books and other media and 40 computers for the public to use.

The Foundation gave 600 packets to the UNMH Young Children's Health Center and St. Joseph Community Health that invite new parents and their children to come to the library to get a library card and a free board book. The packets are in English and Spanish.

Library Baby Showers have given more than 100 parents ideas on how to encourage reading readiness at an early age. The events are sponsored by ABC Libraries with help from The Albuquerque Public Library Foundation, Albuquerque Business Education Compact, St. Joseph Community Health, UNMH, ABQ Health Partners, March of Dimes, WIC and the New Mexico Breastfeeding Task Force and others.

by Kathy Chilton, artist, mother, grandmother and creator of dozens of one-of-a-kind Onesies 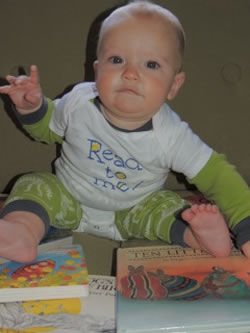 I've been puzzled by what to give as baby presents to my friends' newborn grandchildren. I wanted something I could always have available and that would be suitable for all babies. There are so many options: cute stuffed animals, bright manipulative toys, useful dishes, handy equipment and clever electronics. However, I wanted to find a gift for this growing crop of babies that would be both useful and inspiring, and I loved how the library inspires young readers.

Research now confirms that babies who are read to with regularity increase their language skills and start showing interest in books and reading on their own considerably earlier than babies who lack that stimulation. A good friend of mine who was trying to complete his university studies and take care of his new baby started to read his physics textbooks aloud in an enthusiastic way. He absorbed the content and the baby loved the sound and rhythm of her father's voice.

Since parents often dress their babies in Onesies, I asked another friend to use her sewing machine to embroider "Read to me" on a Onesie. My friend moved so now I write "Read to me" with permanent markers on the Onesies or other garments like bibs. I write it in Spanish and English. Simple or elaborate designs can give the same important message and are fun to do. I also might include sturdy books and a library card application if the family doesn't have one. These families have discovered that the message encourages all people, not only the relatives, to read to the baby.

Go to our Contact page to tell us your library story. E-News may edit for appropriateness and length.

In the 1890s, a group of women donated books, money and time to start a circulating library in Albuquerque, says Dean Smith, director of the now 17 libraries in the Albuquerque Bernalillo County library system.

The early library had several homes until 1901 when it found a permanent location in a brick school building at the corner of present day Central and Edith NE. The building had been purchased and donated to the city by Joshua and Sara Raynolds for use as a public library as long as Albuquerque citizens could raise $1,000. The library opened with 2,382 books.

Erna Fergusson and Clyde Tingley were influential in the early growth of the library. Fergusson was known as the First Lady of New Mexican Letters and was the granddaughter of wealthy merchant Franz Huning. Tingley was a city commissioner for three decades and a governor of New Mexico.

After the death in 1945 of journalist Ernie Pyle, one of Albuquerque’s most famous transplants, his heirs wanted to memorialize Pyle and his work. They left his house to the city to use as a public library. Tingley appointed Fergusson to chair a committee to develop the memorial. The Ernie Pyle Library opened to the public in 1948 as the first branch library.

Another local WW II hero, Clarence M. Botts, was honored with a bequest made by his family. A large meeting room called Botts Hall at the original Main Library was built in 1947. It offers space for the community to gather together, to learn, to engage and to remember.

Others, too, have recognized the value of the Albuquerque Public Library in their wills. The Thomason estate helped renovate Special Collections, formerly the Main Library. The estate continues to fund transportation for children’s classes to visit the library. Renovations of Special Collections also benefited from the Babski estate.

The Jirikowic estate has made a significant contribution to the new library planned for Central and Unser. The estate of Richard A. Freedman, a reader, learner, library customer and downtown Flying Star regular, was designated to purchase books of general interest to the public. A Freedman life insurance policy became the seed money to form The Albuquerque Public Library Foundation.

Such gifts make public libraries brilliant monuments, as author Toni Morrison eloquently says, “Access to knowledge is the superb, the supreme act of truly great civilizations. Of all the institutions that purport to do this, free libraries stand virtually alone in accomplishing this mission. No committee decides who may enter, no crisis of body or spirit must accompany the entrant. No tuition is charged, no oath sworn, no visa demanded. Of the monuments humans build for themselves, very few say touch me, use me, my hush is not indifference, my space is not barrier. If I inspire awe, it is because I am in awe of you and the possibilities that dwell in you.”

Please join our many donors with your own year-end, tax-deductible contribution online, with a check or through United Way.

Anne Hillerman performed her magic at the KiMo Theatre Oct. 1 when she launched Spider Woman's Daughter in an engaging multimedia presentation. Images of the mystical and lonely landscape of the Navajo nation, as well as a look into her father's and her lives were projected on a screen as a back drop to the narrations. Talented actors brought the characters of Bernie Manuelito and Jim Chee to life on stage.

Hillerman’s book follows in the footsteps of her father’s famous stories set in the Navajo nation. She continues the tradition of weaving together history and mystery, but takes her novel in a new direction by focusing on and developing the characters of police officers, Manuelito and Chee who are in pursuit of justice while trying to solve a vicious murder.

The presentation also was exceptional in its approach of engaging the audience in the creative process of writing a novel. Hillerman discussed the genre of mystery, her father’s unique talents for spinning tales, and her rich heritage of growing up in New Mexico.

Hillerman and Bookworks sponsored the evening for the benefit of The Albuquerque Public Library Foundation. Hillerman and Spider Woman’s Daughter was featured in the Fall 2013 issue of UNM's Mirage Magazine.

In the City of Albuquerque's Oct. 8 election, 72 percent of voters approved the passage of library bonds. The Foundation thanks everyone who voted.

Find out how much your library card is worth.